WHO'S ON TV - Programme One 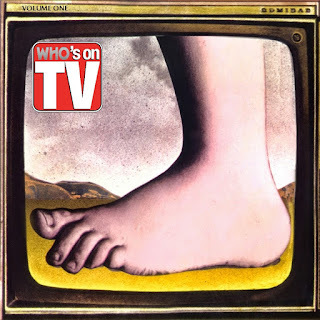 Welcome to a brand new series of shows from the SFC, full of memorabilia and nostalgia from British TV. It will feature long forgotten and well remembered theme tunes, clips, adverts and releases by the stars that appeared on TV over the last Century. There’ll be full versions of themes, usually only heard in the first few moments of a programme, rare singles by famous and obscure artists, cover versions and original tracks by famous singers and songwriters, all on the subject of Television. 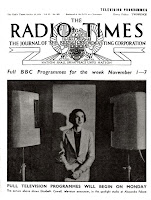 Our first two tracks on our first ‘programme’ showcase the breadth of the time period that will be covered in future shows. From 1930’s singing star Adele Dixon’s perfect introduction to the subject, ‘Television’, performed on the BBC’s first day of broadcast in 1936, to an exclusive, extended, version of David Lowe’s theme to ‘The One Show’,a regular weekday show, broadcast on the BBC, almost continually since 2006. 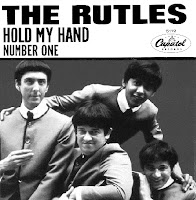 On the subject of ‘Number One’, a track of the same name appeared on the first album by The Rutles in 1978. Three years after their first appearance on ‘Rutland Weekend Television’, the programme’s cast formed a spoof Beatles group that became popular with the Beatles themselves. Their George Harrison character was ‘Dirk’ played by writer and comedian Eric Idle, who went on to write the Theme tune to the hugely successful 90’s sitcom, ‘One Foot In The Grave’. A remixed single of the theme only reached number 50 in 1994, but his ‘duet’ with the show’s star, Richard Wilson, became memorable to all that heard it. 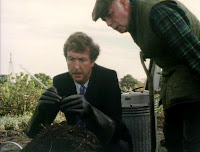 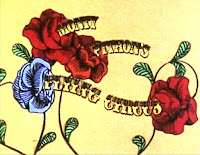 Eric Idle was, of course, one of the original members of the iconic ‘Monty Python’s Flying Circus’ whose theme tune ‘The Liberty Bell’ was originally written for an American operetta by composer John Sousa. Chosen by American Python, Terry Gilliam, the song is the version used for the show, performed here by the arranger James Hakin Howe, under the pseudonym A W Sheriff, and missing only the famous ‘foot-splat’ at the finale. 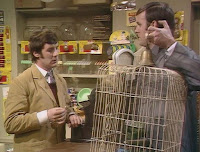 One of Python’s most famous sketches, is ‘The Parrot Sketch’ which is included here in its entire first album version featuring Michael Palin and John Cleese. Cleese, of course went on to write the classic ‘Fawlty Towers’ sitcom, which ran for an amazingly short, 12 episodes. With a theme tune by the Dennis Wilson Quartet, the music sounds like a classical piece, but was, in fact, totally original. 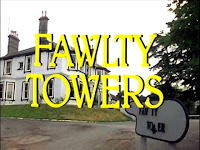 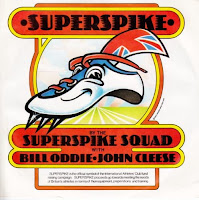 As was the collaboration with Bill Oddie that John Cleese formed to help fund British athletes in the upcoming 1976 Montréal Olympics. In the days before Lottery funding, athletes had to depend on other charities to help them attend the international competition, but unfortunately, the single ‘Superspike’ failed to chart, and the funds raised were minimal. 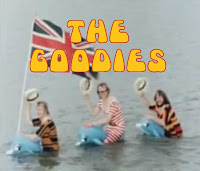 The single had followed a string of hits in 1975, by Bill and his fellow Goodies, so was a great disappointment to all concerned. The comic group’s hit rate had been astounding that year, and their old record company Decca tried to ‘cash in’ by releasing a couple tracks from their first album. ‘Stuff That Gibbon’ and ‘The Goodies Theme’, which was released just after ‘The Funky Gibbon’ had reached the Top 5 in the UK charts. That year, the BBC had revamped the fifth season of the TV programme, and the show now featured the new ‘Goodies Theme’, which became more familiar to the viewers and made the Decca release sound ‘dated’. 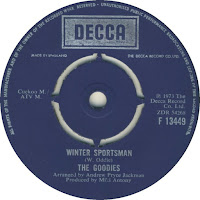 One of the earlier TV episodes, ‘Winter Olympics’, from 1973, the ‘slapstick’ section had Bill Oddie singing ‘Winter Sportsman’ in the background, a song that was re-recorded featuring fellow Goodie, Tim Brooke Taylor on lead vocals, for the first album.

The scene featured Tim having roller skates attached to skis, and being towed by the other two, on their famous trandem, down a children’s slide. Not a scene repeated on the regular winter Sunday afternoon TV Sports programme ‘Ski Sunday’.

The show is the longest running BBC sports programme, and has retained the original theme by Sam Fonteyn, since the late 70s. Based on Bach’s Fugue in D Minor, ‘Pop Looks Bach’, the music has become iconic in the minds of any sports fan. As has ITV’s sports show theme for ‘The World Of Sport’. 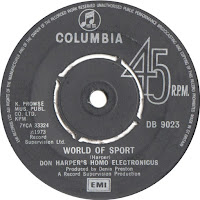 The March was first used in 1968 and was composed by Australian musician, Don Harper, and released as a single in 1973. The show featured sport of all types, including football, racing, wrestling and boxing. 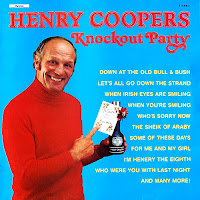 The undisputed King of boxing at that time was, recently retired, Henry Cooper, who had held the British Heavyweight title for an amazing, record breaking, 12 years between 1959 and 1971, (with short breaks). He remained popular with the public via his TV appearances and other activities including a 45 single release with ‘Knock Me Down With A Feather’ late in 1976. But it was a series of adverts for Brut aftershave, that his popularity really cemented itself. His catchphrase ‘splash it all over!’ became a marketing dream, when it became synonymous with both him and the brand.

So much so, that it became much easier thereafter to get other sports personalities to put themselves in adverts. Joining Henry in Brut ads, were footballer Kevin Keagan and World Champion Motorcyclist, Barry Sheene. 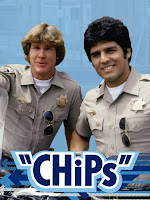 Barry became the face of motorcycling across the world, and the love of all things, two-wheel related, was highlighted in the US, with the start of the TV series ‘CHiPs’ in 1977. Set in California, the two Highway Patrol officers were played by Erik Estrada and Larry Willcox, and lasted for six seasons and 139 episodes! The Theme tune was released by Corniche in 1979. 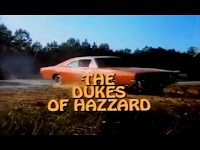 Running for 8 shows more than this, also in 1979, was another ‘two guy’s’ ‘buddy series’, ‘The Dukes Of Hazzard’. The two show’s themes were released as a double ‘a’ sided single in 1982, with the ‘Dukes’ theme, ‘Good Ole Boys’ by country star Waylon Jennings, complimenting the Corniche track.

Both the actors playing the Cousins Duke (Bo & Luke) had sizable recording careers, Tom Wopat released many singles during the 80s, but it was co-star John Schneider who had the most success, hitting the US Billboard chart four times across 1981/’82, with his first, and biggest release, being the number 14 hit ’It’s Now Or Never’. 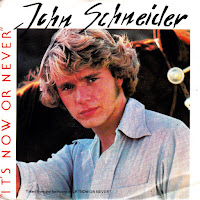 The best-selling single for Elvis Presley, the song was based on Italian classic ‘O Sole Mio’ composed by Eduardo di Capua which became famous, all over again in the UK when it was used as the music for a Wall’s Ice Cream advert. 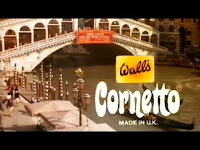 ‘Just One Cornetto’ was supposedly sung in the advert by singing waiter Renato Pagliari (Renee of Renee & Renalto), but this has since been denied by his family. Ever ready to profit on a fad, pop svengali Jonathan King released a version as Count Giovanni di Regina in 1978. 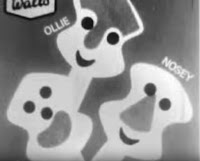 Wall’s were responsible for many musical moments on the TV over the years, including the memorable jingle for ‘Funny Faces’ in the late 60’s (pre-runner to ‘Funny Feet’, supposedly for those that preferred eating feet to faces?) and the very 60’s evoking ‘Kinky’. The advert for this particular collection of chemicals and sugar was voiced by up-coming DJ, Kenny Everett.

Kenny had become the voice of many TV adverts and programmes, being the voice of Charly The Cat in the public information film series ‘Charly Says’ and the announcer for ‘Celebrity Squares’, but it wasn’t until 1978, when ITV gave him his own TV series ‘The Kenny Everett Video Show’ that his anarchic brand of humour and characters really took off. The theme music, ‘Electro People’, was one of the last releases by 70s band Fox, and dance segments were provided by the then, controversial, Hot Gossip. His zany characters in the show included the punk Sid Snot, the flamboyant Marcel Wave, and the ex-porn actress Cupid Stunt! 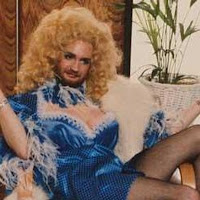 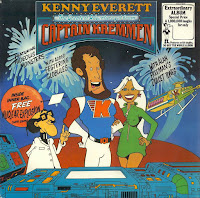 Another popular character from the show was the animated sci-fi adventures of Captain Kremmen. First appearing on radio in 1977, a single was released with Mike Vickers entitled ‘Captain Kremmen (Retribution)’ and was a top 40 hit in that year.

Vickers was a known producer of scores for films and TV soundtracks, but he is probably best known publically for being an early member of the group Manfred Mann who provided the best known theme (and Top 5 hit, ‘5-4-3-2-1!’) for the weekly pop show ‘Ready Steady Go’. 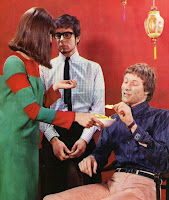 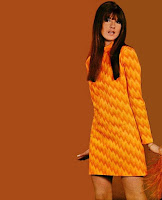 Initially hosted by Dusty Springfield, the show was mainly hosted by Keith Fordyce and Cathy McGowan. McGowan had been selected for her youth and fashion style, and became somewhat of an icon during the programme’s run. She became a major promoter of various fashion brands including Biba, British Home Stores, and a cosmetics range called ‘Super Natural.

In 1970 she married film actor Hywell Bennett who became popular on TV through his sitcom ‘Shelley’ which ran between 1979 and 1992.The theme tune for ‘Shelley’ was by famous theme composer Ron Grainer, who had also composed the theme for the TV series ‘Dr Who’, and it is with this, original theme, that we conclude our first trip through the TV related archives. 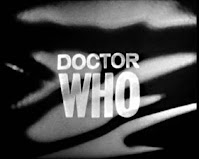